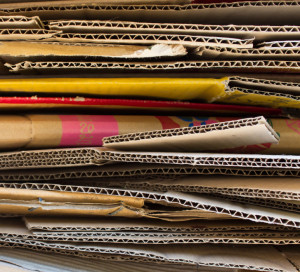 We don’t give much thought to cardboard in this day and age. We use it for many different things, and many tasks can’t be completed without it. Think about the postal service… Can you imagine what shipping items would be like without cardboard boxes? We’d have to have wooden boxes for most everything!

Cardboard is often under appreciated in our society. We use different variations of cardboard for lots of things. Think about this: we have traditional corrugated cardboard, like that you see in regular brown cardboard boxes, and paperboard, which is a thinner cardboard we use for cereal boxes and foods. Both of these items are widely recycled (woohoo!), except sometimes when contaminated with chemicals or food greases. Imagine what cereal would be like without paperboard boxes. Everything would probably end up in plastic bags! 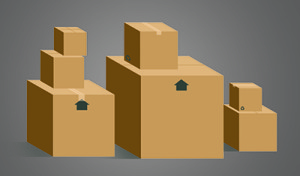 Cardboard is an interesting material made by wood fibers in the same way paper is pressed together. Relatively inexpensive and lightweight, cardboard, like other paper, can be recycled up to five or six times. Cardboard is actually on the low end of the recycling hierarchy; when writing paper (or premium quality paper) is recycled, since the fibers are cut shorter, the next item below it to be created with the fibers can be turned to a notepad. When that notepad is recycled, it can be turned into tissues, cardboard, paperboard, or toilet paper. Often times, regular corrugated cardboard boxes can be recycled into paperboard. However, most recycled paper is shipped abroad to China, so you probably won’t see the pizza box you tossed in the recycle bin in any other form. Recycling waste is actually the US’s largest export to China.

The origins of cardboard as we know it today are complicated. Without being so widely known, it’s hard to trace, exactly, where cardboard comes from. It’s thought that the original idea of cardboard began about four thousand years ago during the Han Dynasty in China. Isn’t it interesting to know that we export cardboard to China when they were the original pioneers of the idea? Individuals would use treated sheets of Mulberry tree bark to wrap and preserve foods. As paper items and printing presses became more prevalent, cardboard gradually began to take shape. Originally used to be written on (instead of storage), the first actual documented use of a cardboard box was in 1817 for a German board game.

In 1856, corrugated cardboard came to be when Edward Allen and Edward Healey patented a product in England for pleated paper, which afforded both flexibility and some insulating warmth.  The actual familiar cardboard box shape wasn’t actually created until 1879 by Robert Gair, who owned a paper bag factory. Pre-creased and pre-cut cardboard boxes were soon used by many companies and big time clients around the world.

Curious as to how corrugated cardboard is recycled? Homeguides.com provides a full breakdown of how a cardboard box is turned to new boxes.

Do you do anything special to recycle your waste cardboard? Let us know in the comments below.