The Irish and New Hampshire 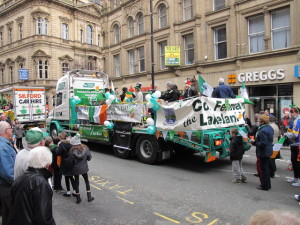 With St. Patrick’s Day and the celebration of Irish culture on the horizon, people from Dublin, Ireland to Dublin, New Hampshire are gearing up for a day of feasting on corned beef and cabbage, decorating with shamrocks, and drinking green beverages to boisterous music. Parades are held all over the U.S., and many a bar stays open well into the night.

While many of us are excited for the joy and celebration that the holiday brings to light up these dreary winter months, we tend to forget what brought St. Patrick’s day to our doors in the first place. Aside from the legend of St. Patrick, which began as a religious celebration for the patron saint of Ireland, there is a lot of history between New Hampshire and the Irish people.

It all started in the 1820s and 30s, when Irish immigrants arrived in America and began to make their way northward through New England. By 1850 there was a population of over 1,300 Irish in Manchester, which made them New Hampshire’s first major immigrant population. By 1860 the Irish made up 20% of Manchester’s population alone, tripling their numbers in just ten years. Unfortunately, this increase also gave birth to our state’s first serious anti-immigrant feelings, largely due to conflicting religious beliefs, language barriers, and wage concerns of the time.

However, despite these difficulties, the Irish made up most of the workforce that built the Granite State’s major cities, including Manchester and Concord. They helped lay down the old railroads that allowed businesses to thrive in New Hampshire, some of which are still in use today. Many worked in New Hampshire’s mills, even amidst dangerous machinery. They did all of this while being paid less than NH natives, mostly because they were desperate for work. And when the Civil War came, the Irish were right on the front lines with their fellow Granite Staters, helping to protect their home.

It’s no surprise that Manchester celebrates with an amazing parade, considered to be the largest community event of the year, with more than 70,000 people expected to attend and participate. There is also a host of events at New Hampshire’s local businesses, including our many bars and taverns. If you’re new to NH or just visiting, and looking for an enjoyable way to celebrate this St. Patrick’s day, have no fear! There’s plenty of green to go around!

One thought on “The Irish and New Hampshire”